Less More
3 years 1 month ago #13 by Maquisard
Replied by Maquisard on topic Little stories
The reason John F. Kennedy kept a battered coconut shell on his desk in the Oval Office During his presidency, John F. Kennedy decorated his desk with a number of items that carried personal meaning. These included model sailing ships, an ornamented whale tooth, and various naval memorabilia.
However, the most unusual and perhaps most significant item was a paperweight made out of an old, battered coconut shell. A faint handwritten inscription on the shell stated: “NAURO ISL… COMMANDER… NATIVE KNOWS POS’IT… HE CAN PILOT… 11 ALIVE…NEED SMALL BOAT …KENNEDY.”
The coconut shell stood on JFK’s desk as a reminder of his almost losing his life in the Pacific in World War II. In 1943, Kennedy was a lieutenant in the U.S. Navy who probably didn’t ever dream about becoming the most powerful man in America. He was in command of PT-109, a small torpedo patrol boat with a crew of 14 men based at Tulagi Island in the Solomon Islands. The boat was tasked with patrolling the waters around the Solomon Islands and scouting the area for Japanese military vessels. One night in August, PT-109 was intercepted by a 367-foot-long Japanese destroyer named Amagiri. Kennedy’s crew was getting ready to attack the ship, but the gargantuan destroyer was moving fast and was way more agile than they anticipated: It deliberately ran into PT-109 and literally cut the small boat in half. Two men were killed, and the rest of the crew found themselves in the water. Kennedy knew that the Japanese ship might turn around and try to finish off the survivors, so he ordered his men to swim to a nearby island. Although his back was badly damaged from an injury while playing football in college, he managed to tow a badly burned crew member for two hours until reaching the island.
o the misfortune of Kennedy and his crew, the barren island was uninhabited, with no food or water to be found. Kennedy persuaded his crew to swim to another island a couple of miles away that hopefully had some vegetation. The men reached the island after several hours of exhausting swimming; their ordeal was worsened by the constant fear of Japanese patrol ships. They also feared military outposts that could have been hidden on the island. When they arrived, they discovered that the island, then known as Plum Pudding Island and today known as Kennedy Island, was also uninhabited. But it had palm trees.
For the following six days, the crew survived only on coconuts that they found on the palm trees. On the seventh day, they encountered two men in a canoe: the men were natives from a nearby island and, fortunately for Kennedy and his men, they worked with the Coastwatchers, a secret network of agents that informed the Allies of the positions of Japanese military outposts.
They agreed to help the stranded men, so Kennedy etched a message on a coconut shell, and the two islanders brought it to the Allied forces stationed at Tulagi Island.

The two islanders managed to safely avoid a network of Japanese scouts and patrol ships in the waters around the Solomon Islands, and the message found its way to the Allies. After the crew of the ill-fated PT-109 were transported back to safety, Kennedy’s bravery and tactical thinking earned him the Navy and Marine Corps Medal and a Purple Heart. 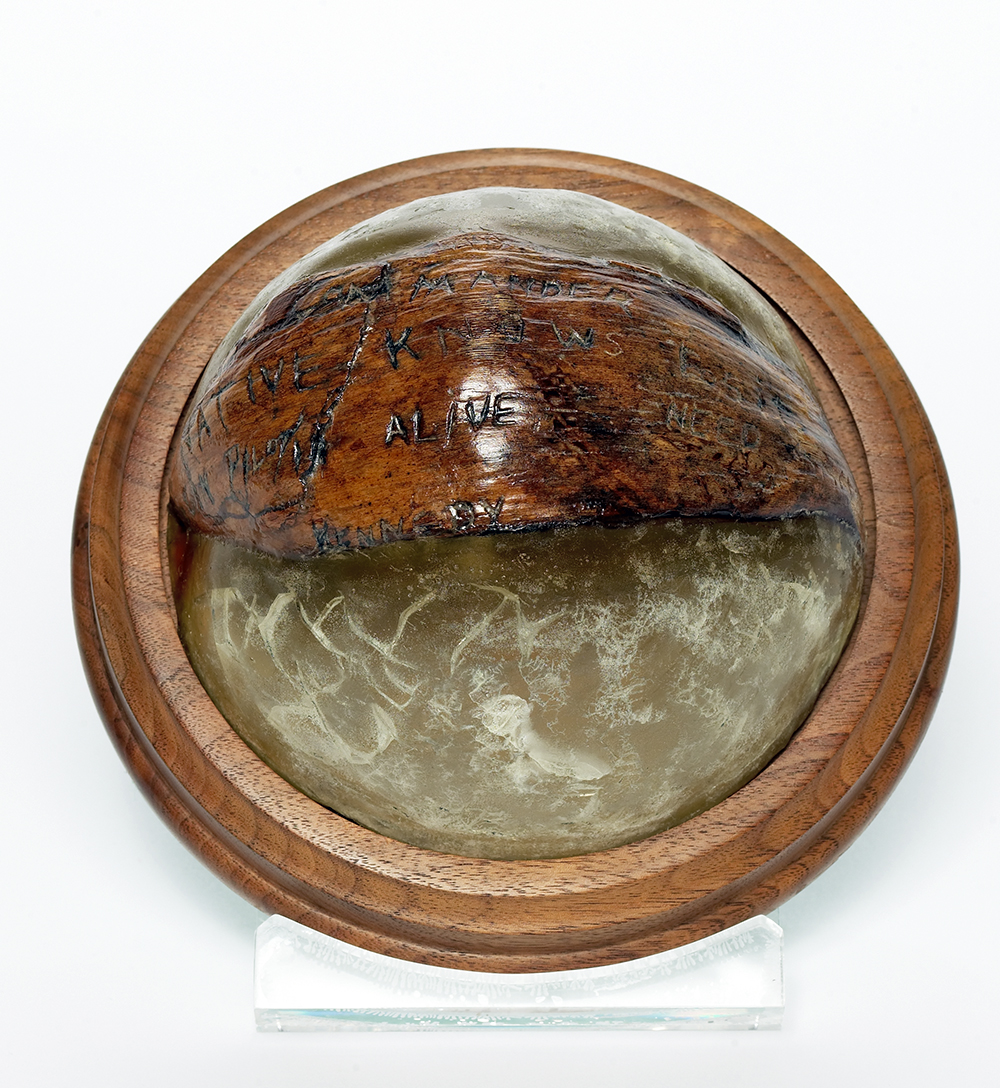 The concept for the BEANO hand grenade was that a spherical grenade the size and weight of a common baseball would be effective in the hands of American troops. The designers believed that by emulating a baseball, any American young man should be able to properly throw the grenade with both accuracy and distance. The final design for the T-13 hand grenade utilized a pressure trigger as well as an in-flight arming device. The grenade was designed to be thrown as a traditional baseball, and as such it was held with two fingers on a weighted and knurled "butterfly cap" and the arming pin was removed. Once thrown, the cap detached from the body of the grenade and a length of nylon string unwound until a secondary arming pin attached to the far end of the cord was pulled, arming the grenade to detonate upon impact with a hard surface. While the original design called for a 5.5 oz (160 g) total weight, it was later decided that this was too light and the weight was increased to 12 oz (340 g).
The following user(s) said Thank You: snowman, jacobston

Less More
3 years 1 month ago #15 by Maquisard
Replied by Maquisard on topic Little stories
How to Make the M1 Garand Even Better — Shorten It, Make It Lighte

The World War II M1 Carbine was never actually meant to be a front-line infantry weapon. Rather, the U.S. Army had envisaged soldiers in support roles using the gun strictly for last-ditch, personal defense.

In January 1944, the Infantry Board tested a shorter and lighter version of the Garand developed by the 93rd Infantry Division. The Board concluded that shortening the rifle did not impair its accuracy.
Col. Rene Studler, the chief of ordnance, directed Springfield Armory to develop a suitable carbine for widespread issue. John Garand, the M1's head designer, began work on an appropriate folding stock.

The prototype M1E5 featured a barrel that was just 18 inches long, down from the standard 24 inches — and also boasted an ingenious, folding, pantograph-style stock that attached via a rear metal cap.
The weapon’s overall length with the stock extended was 37.5 inches. It weighed 8.4 pounds. This was still longer and heavier than the 5.8-pound, 36-inch M1 Carbine was, but lighter and more compact than the 9.6-pound, 43.5-inch Garand was.

Revisions to the stock improved the weapon’s ergonomics and strength — especially when firing rifle grenades. However, the Springfield Armory suspended work on the Garand carbine shortly after finishing testing in late 1944. Springfield redirected its staff to focus on the select-fire T20 rifle then in development. The war ended before Springfield could revisit the carbine project.
Garand filed a patent protecting the stock design in June 1946, and the government granted it in February 1949. Springfield Armory only built one M1E5 prototype. It remains in the Armory’s collection.

"Straight and narrow is the path."
Last edit: 3 years 1 month ago by snowman.
The following user(s) said Thank You: Maquisard 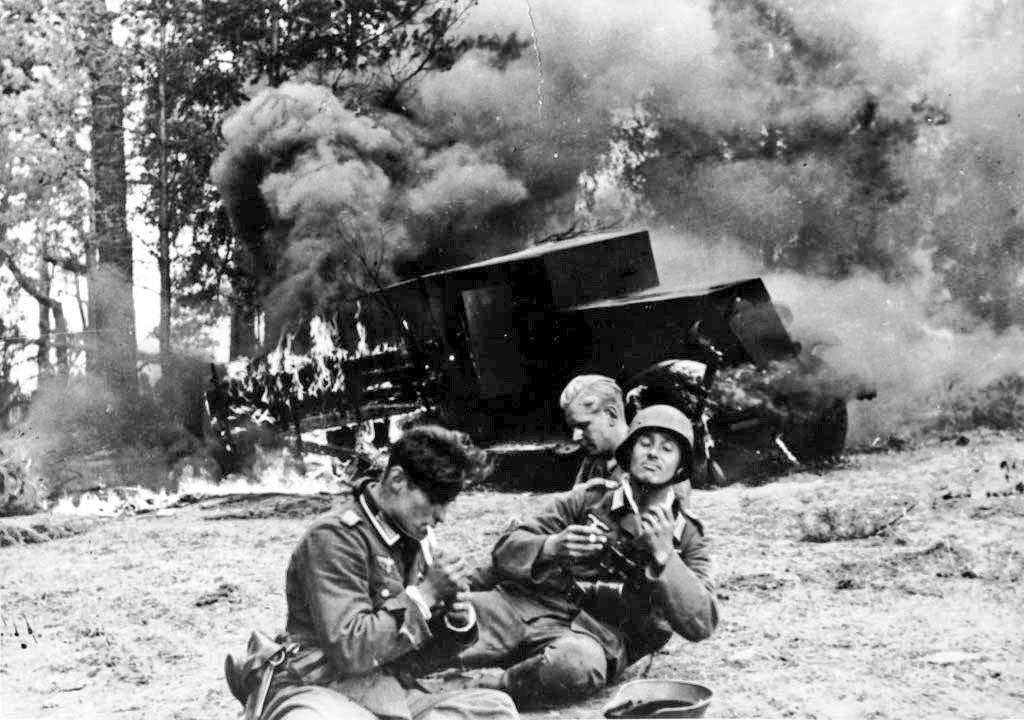 GAZ AA SOVIET SHIELDED TRUCK
Image:
German soldiers resting after the hard fighting in the vicinity of Leningrad, 1941. Behind, a Soviet armored truck in flames model GAZ-AA.
The burning vehicle is a limited variant of the GAZ-AA truck, limited since this model is armored, hence the silhouette between the smoke is very straight, are the armor plates.
Place: near Leningrad.
Date: 1941.
History:
The GAZ - MM was produced in the late 1930s and early 1940s by GAZ in the Soviet Union. It is a simplified version of the Soviet license version of Ford Model AA. At the beginning of World War II, more than 150,000 were used by the Red Army.
The GAZ-MM was only a designation of a 50 HP reinforced engine, introduced in 1938, in the factory documents these trucks were still designated as GAZ AA. 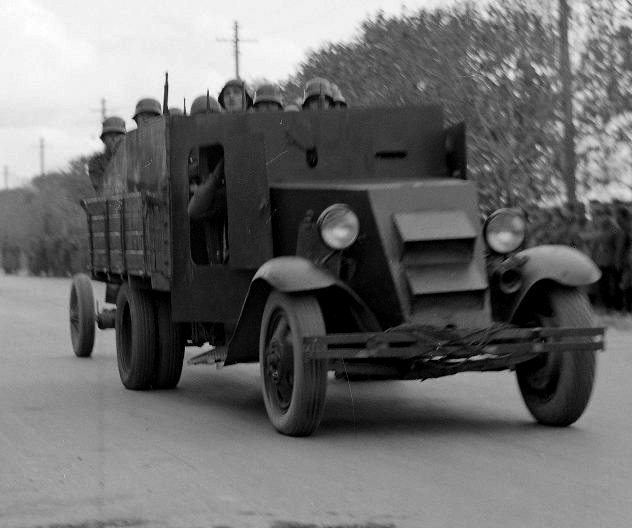 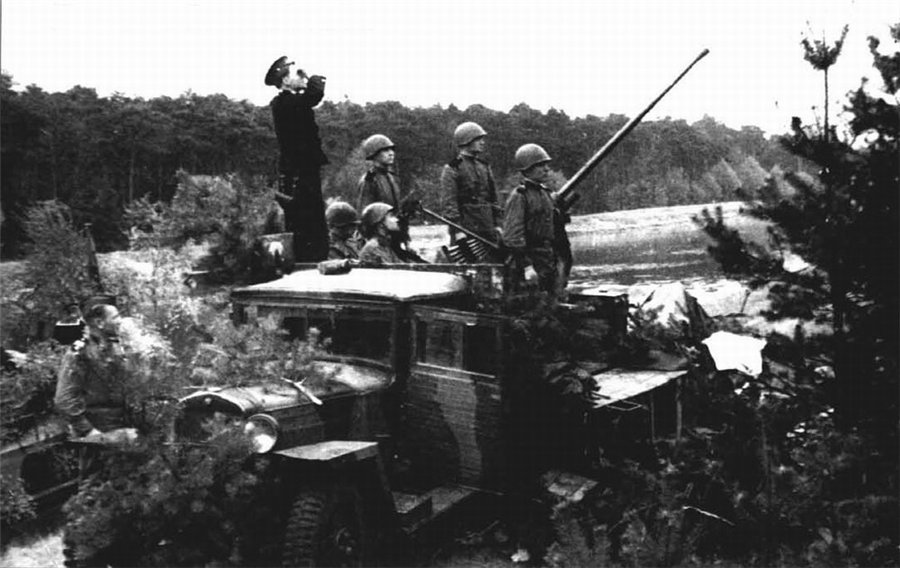 - 72-K GAZ - MM anti-aircraft trucks equipped with an M1940 (72-K) automatic cannon of 25 mm anti-aircraft defense. The cannon was created in the early 1940s at Artillery Factory No. 8 in Kalinin, under the direction of chief designer Mikhail Loginov.
not fear the enemy that attacks you,
be afraid of the false friend that hugs you