Less More
1 year 8 months ago - 1 year 8 months ago #13 by snowman
Replied by snowman on topic Race, just race ... Formula 1
It looks like Honda engines will be on both Red Bull owned F1 racing teams until 2024 and they are hoping Tsunoda will spark interest to make it to the better team. Best wishes to Max for winning this F1 season. Nice to see him bringing the Monaco victory to Honda since Senna did in 1992.

Keeping an eye on Tsunoda's progress

"Straight and narrow is the path."
Last edit: 1 year 8 months ago by snowman.

Less More
1 year 7 months ago #14 by Sasha
Replied by Sasha on topic Race, just race ... Formula 1
Review of the practices of the Azerbaijan grand prix:

In the morning, the state of the track left much to be desired. The cars, set for minimum downforce, slid, lacked traction in slow sections, and clouds of dust rose on the straights.

The asphalt temperature under a cloudless sky already in the first session exceeded fifty degrees, the teams focused on finding the optimal settings and assessing the efficiency and resource of tires in such hot conditions.

At the 12th minute, the virtual safety car mode was announced in order to remove the debris that got on the track.

At the 28th minute, Tsunoda blocked the tires on braking, drove into the safety pocket and only with the help of an engineer's advice and after a long pause was able to leave. Later, Hamilton, Gasly, Schumacher, Norris and Bottas were in the pocket, but they coped quickly.

At the exit from the 16th turn, Norris's car turned around, it stopped towards the traffic - Lando effectively turned it around again and continued moving.

At the end of the session, Mazespin, after taking off, crashed into a barrier in the 16th turn, but the car was almost unharmed and he returned to the pits.

At the beginning of the second training session, the track was in better condition than in the morning, but the cars still slipped on the hot asphalt. For the first time, Pirelli brought the softest rubber compounds to Baku, but they did not provide the necessary grip either.

The teams worked through the traditional tire life and efficiency assessment program over a distance, trying to achieve good mechanical traction with the track with little downforce. Almost everyone started the session with Medium, then switched to Soft. The asphalt gradually cooled down.

In the morning the riders were careful, and in the second session they increased the pace - there were noticeably more mistakes than in the first training session. Bottas, Norris, Gasly, Vettel and Tsunoda were in the safety pocket, Vettel was deployed at the exit from the 16th turn.

Latifi could not continue driving after flying into his pocket - he returned to the track, but after a few meters the car stopped and had to be evacuated. The session was stopped with red flags, after seven minutes the riders were able to leave again.

In the 27th minute, Leclerc blocked the tires and crashed into a barrier in turn 15, damaging the front wing. Charles slowly returned to the pits. To remove the wreckage, a virtual security car mode was announced.

Mercedes drivers were outside the top ten, Lewis Hamilton complained to the engineer that he did not know how to play the time - he already squeezed the maximum out of the car, but it was inferior to rivals in speed.

The protocol was headed by Sergio Perez, having driven a circle in 1: 42.115, two Red Bull cars and two Ferrari cars on the first lines.

On Friday, not everyone managed to get the tires to work on the slippery asphalt of the Baku highway. Even the softest formulations did not provide proper grip, on long straight lines the rubber cooled down, and there are no high-speed turns that allow it to quickly warm up in Baku.

The teams made adjustments and on Saturday morning continued to work with three sets of rubber and gradually gaining speed.

As on Friday, there were yellow flags. Bottas, Verstappen, Latifi, Sainz, Schumacher and Vettel drove into the security pocket without consequences for the cars.

In the 25th minute, Max Verstappen crashed the car in the 15th turn, damaging the front suspension. The session was stopped with red flags. For Max, the training ended there, and the others were able to continue after ten minutes.

Mazepin touched the wall with the right side of the car and returned to the pits for a check - the blow was tangible, Nikita never left.

Russell's car stopped at the first corner due to powerplant problems - George complained of an unexpected loss of power. For her evacuation, a virtual security car mode was announced.

The fastest time was shown by Pierre Gasly of AlphaTauri with a lap in 1: 42.251.

Qual starts on 14:00 in CET time.
The following user(s) said Thank You: snowman

The starting position in Baku does not affect the result as clearly as in Monaco. Only two races out of four on this track were won by the pole holder, and in 2017, Daniel Riccardo, who started tenth, won. But in the past Grand Prix of Azerbaijan, in 2019, the first three at the finish line exactly repeated the first three at the start.

For the first time, Pirelli brought the softest rubber compounds to Baku - as in Monaco, C3, C4 and C5 were used in the roles of Hard, Medium and Soft. Two weeks ago, many were experiencing warm-up problems due to the cold weather in Monaco. It was much hotter in Baku, but the tires cooled down on long straight lines, many complained about the lack of grip on slippery asphalt, and not everyone managed to adjust the settings during the three workouts.

Red Bull Racing had the least problems. On Friday, Verstappen and Perez showed the best time, on Saturday morning Pierre Gasly headed the protocol, and Max Verstappen crashed the car after a braking error in the 15th turn. The damage was not too serious, and by the beginning of qualification the mechanics had repaired everything.

Williams hastily changed the power plant on Russell's car - he stopped on the track at the end of the third workout due to a breakdown of the cooling pump. The mechanics coped, George left with a delay, but was able to participate in the qualification.

In the first session, Hamilton and Bottas went to Medium, the rest chose Soft. In the third minute, red flags appeared - Lance Stroll crashed the car in turn 15, breaking the suspension and front wing. The Canadian apologized to the team, the car was evacuated, and twelve minutes later the drivers left again.

On the second attempt, everyone went to Soft. Ten drivers managed to drive a fast lap when red flags appeared again - Giovinazzi crashed the car in the same 15th turn. Lando Norris did not turn into the pit lane with the appearance of the red flags, but drove on, discussing his actions with the team. The stewards reviewed the incident after qualifying and punished the rider with a loss of three start positions and three penalty points.

The pause lasted nine minutes, after which the drivers again drove to Soft. The best time was shown by Hamilton, having driven a circle in 1: 41.545. Latifi, Schumacher, Mazespin, Stroll and Giovinazzi dropped out of the further struggle.

In the second attempt, everyone was on a fast lap when Daniel Riccardo crashed the car in the third corner. Red flags appeared, the session was decided not to continue. Vettel, Ocon, Riccardo, Raikkonen and Russell did not qualify for the final.

In the final, everyone went to Soft. Tsunoda and Gasli gave up the first attempt. Mercedes worked in a series of circles, gradually bringing the tires into operation. In the first attempt, Leclerc headed the protocol, having driven a circle in 1: 41.218.

In the second attempt, everyone was on a fast lap when the red flags appeared for the fourth time. Tsunoda crashed the car in the third turn, and Sines, who was driving behind, did not have time to react and flew into the safety pocket, also crashing the car.

Charles Leclerc won qualification in Baku, having won the ninth pole position in his career and the second in a row. Together with him, Lewis Hamilton starts from the first row, Verstappen and Gasly will start from the second race. The race will be interesting!

Available tire sets before the start 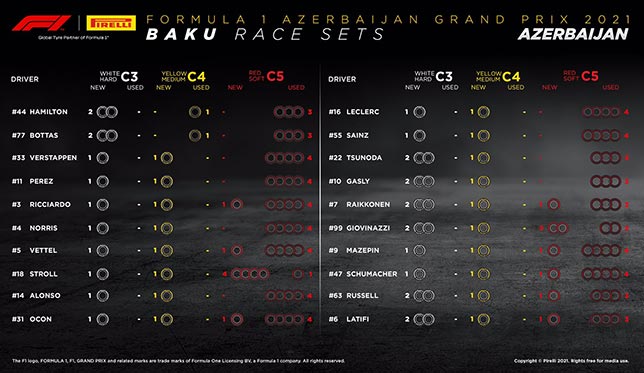 Less More
1 year 7 months ago #17 by Maquisard
Replied by Maquisard on topic Race, just race ... Formula 1
French Grand Prix Near Toulon  in the south of France

snowman wrote:
Best wishes to Max for winning this F1 season. Nice to see him bringing the Monaco victory to Honda since Senna did in 1992.

Edit: F1 videos are blocked... you need to watch on Youtube


"Straight and narrow is the path."
Last edit: 1 year 1 month ago by snowman.