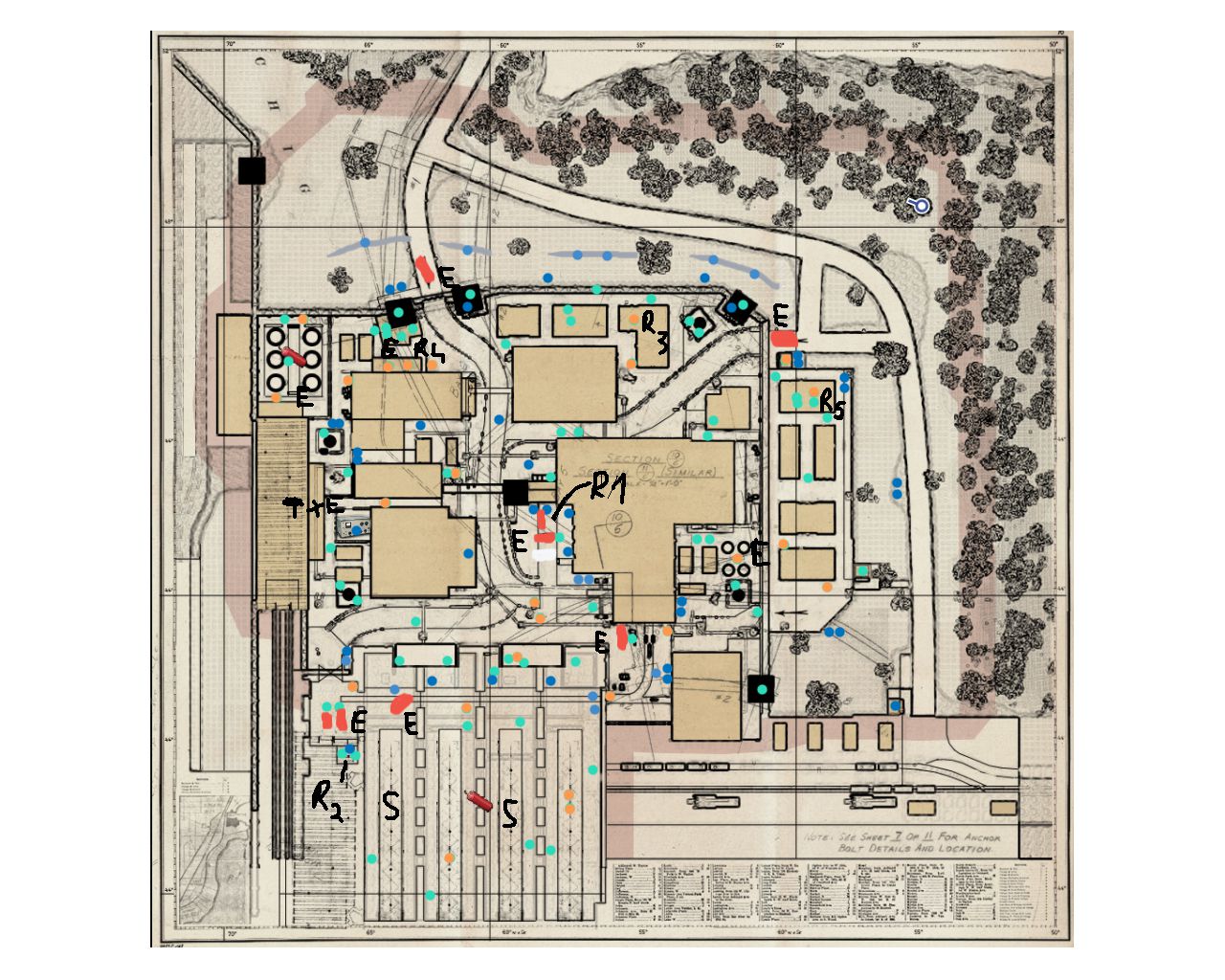 It would improve the game a bit if we can make the enemies
spawn in randomly and objectives as optional, leaving the
ending of a map to our choice.

I won't be making a story out of this map, I can start by telling
you what all of these dots represent:

Green dots - are the current soldiers or patrols

Orange dots - are the current soldiers or patrols that can be set
to spawn randomly, meaning - they can be there once we start
the map, but if we restart they might not be there the next time.

Blue dots - are some new positions where we can add new enemy
soldiers or patrols - they can also be random.

Grey lines on N of the map are the trenches, if anyone thinks there
can be some trenches with 1-2 enemies around - or no enemies

Radios and explosives are marked with R and E

S - means we can add more subs or just another sub in the 1st
or 3rd dock.

Red lines/squares can be trucks we can destroy

Key in one of the patrols' pouches - in the barracks area

The ones that want to try to start modding this map a bit can start with
the random soldiers only. This should be enough for a map like this.
I just added the rest as additional stuff that may take more time implementing

Spawn in randomly meaning the soldier or patrol can be there or not. This way
we can have between 50 and 100 or so soldiers on the map. It would be a major
difference in gameplay not knowing if an enemy is there. Steff told me the random
soldiers is not hard to implement.

I hope someone has some time to do the random soldiers, at least

Less More
8 years 3 months ago #2 by betteryouthanme
Replied by betteryouthanme on topic Random Play Mission Requests
About additional subs and trenches.
We have no tool yet to edit the collisions file tree.klz. We could find a way around for the subs but definitly not with the trenches, therefore we need hdmaster's 3ds Max plugin.

Everything else is possible. Started today with placing a few objects.
Will see what i do about random spawns, i can give each soldier some kind of spawn chance of 50% or 33%, whatever suits best. This would be simple and best solution regading randomization i guess.
The trucks will spawn or spawn not, depening if the objective is active. Okay if it's too complicated with the vehicle checkpoints then i leave them where they are..

Two things fill the mind with ever new and increasing wonder and awe - the starry heavens above me and the moral law within me. Immanuel Kant
The following user(s) said Thank You: snowman

The trucks are with red and they are either there or you can add them. Those are just possible
locations where you can add a truck. You can add them there and we can blow them up or
place explosives.

You can also add explosives on the flaks as additional objective - forgot about it.

But what about reinforcements from forest after some objectives are completed and with random time.

When i modded Brest i made this map...can be useful. 10 pixels on picture is 1m on map.
Brest enemy orig placement
The one who hesitates is lost !
The following user(s) said Thank You: snowman

Less More
8 years 3 months ago #5 by snowman
Replied by snowman on topic Random Play Mission Requests
Some of the blue enemies can be patrols. Please don't add any mp44 or g43.
Restrict only to k98 and mp40. You can add more engineers on the map with
pistols of you like.

Also remember to create the map for the enemies to spawn as you go on the
map, not to spawn when the map is started. Joel did this mistake on his Libya1
Day map, which makes the map very laggy. If you see, all the Sabre maps have
positions from where the enemy can spawn in.
"Straight and narrow is the path."

Less More
8 years 3 months ago #6 by betteryouthanme
Replied by betteryouthanme on topic Random Play Mission Requests
@Stern
Sure forest reinforcement would be fine, however i go for the random soldiers and objectives first.
Nice map it's very useful. But for explosions and other "need to be placed exactly" objects i check the position first with 3ds Max, otherwise it would take 10min each.