Less More
6 years 5 months ago #19 by snowman
Replied by snowman on topic Random Play Mission Requests
Yes, I like Brest and Arctic1. They are the only maps you don't need much modding. At least
Brest is going to have some additional changes. Steff is working on it 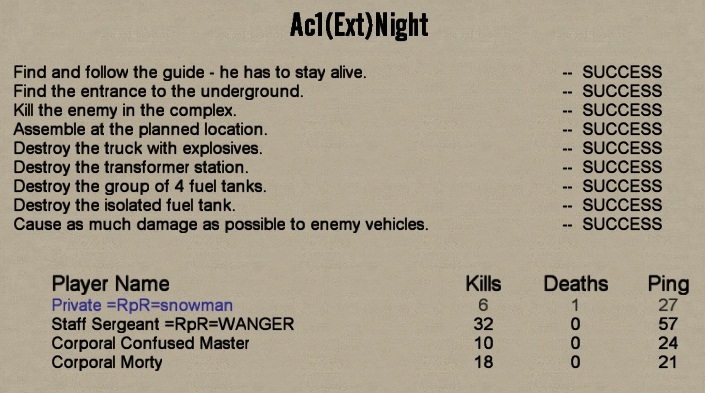 Patrols that are in circles can spawn only as a group. The rest can spawn
independently.

That's all for now. I'll be waiting for Steff to finish Brest and someone else
maybe to start modding this one.


I have another additional request. It's Zdenda's Burgundy 1 map. I would
like if someone removes the timer set to save the allied prisoners. Remove
the 2 part objectives - those that appear after you save the allies - just put
them all together. We can save the allies later if we want to.

Also keep the 3 soldiers moving to our spawn as static patrols. They come too
fast and if we are making a discussion or something.

Another thing that would need to change is the MP44s and G43s. Change them
to MP40s and K98s. That's it. It's not too much to change and these changes would
make the map more playable as a team. Zdenda made it as a lone wolf mission.
"Walk through all fear no matter what."

Less More
6 years 5 months ago #21 by Max.
Replied by Max. on topic Random Play Mission Requests
what about creating Ardennes2 coop or Alps 3 coop(better) I know its hard to moding maps,but Ard2 coop does not exist


'December 1942: You were part of a commando team captured during a raid earlier that day. You were all taken hastily to an under-construction oil refinery in the north of Eastern Europe, where Polish and Russian political prisoners were already being held. Here, you were interrogated by the German officers and one of your comrades caved; giving the plans for the rest of the assault to the Germans. You must now attempt your escape. You have to eliminate the officer who interrogated your team and recover the records of the interrogation. Upon escape, retreat into the forest and locate the local resistance, who will lead you back to your unit. The fate of your team rests in your hands.'

Where the Commander's Car is parked, there may or may not be a mechanic. The car will not work, but there will be wire-cutters and the mechanic's knife near it.
The Gestapo Officer may be in his building, near his car waiting for the mechanic to fix it or near Gaurd Checkpoint 2.
Guard spawns 1 and 2 may spawn guards when the alarm is raised. Guard spawn 1 will spawn 5-6 outside the door closest to the fence, #2 will spawn 2-3 gaurds at the 'bunker entrance'
After a random amount of time, a truck will spawn at the end of the road and drive to the main gate (Driver will walk to guard checkpoint 2)
Not sure if this is possible, but a German Ship or U-boat could be moored at the dock, crew spawns on deck if alarm raised?
Random guards walking along roads (2-3 each)
Guards at the machine-gun nest, with working truck.

Guard spawn 3, active after random amount of time
Random guard patrols through forest, at or near campfire
Supplies at cottage?

I don't really care if this is made into a mission (I don't even know if it's possible), It is just an idea I wanted to share